RFA expands to Portugal to press ahead launcher development. 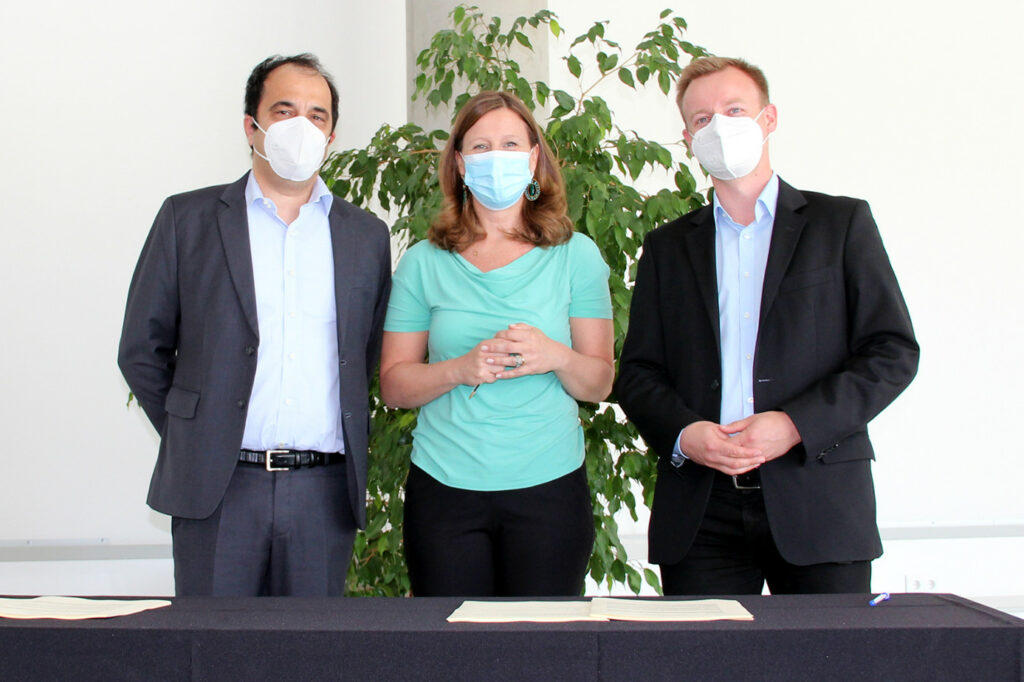 Augsburg, Germany – June 30  , 2021 – RFA Portugal Unipessoal LDA, a subsidiary of Rocket Factory Augsburg AG (RFA), officially opens their offices in Matosinhos, Portugal. This newly formed product engineering and manufacturing partnership with Portugal will provide a competitive edge to RFA’s business case and catalyze the launch vehicle development. Through the expansion of the development team to Portugal, RFA increases its European footprint leverage the broad talent pool as well as development capabilities in Europe. RFA already operates a site in Sweden for engine test and qualification activities and recently baselined the Norwegian Andoya Space Port for launch.

During the inauguration, a multi-million Euro agreement was signed with AICEP, the Portuguese Trade & Investment Agency. The agreement targets the development and qualification of RFA ONE’s launch system composite structures in close collaboration with Portugal’s Centre of Engineering and Product Development in Matosinhos (CEiiA). The hardware will be designed and manufactured using advanced composite materials that allow for higher launch-vehicle performances and lower production costs. RFA Portugal, together with CEiiA, will invest 9 million Euros over three years and lead the subsequent industrialization efforts.

Manuel Heitor, Minister for Science, Technology and Higher Education explained: “The development of micro-launchers in Europe is a critically relevant step to foster European autonomy and resilience in space. This will help to promote skilled employment, along with new markets, to foster the green transition of our societies in conjunction with emerging opportunities in the European digital transition.”

“It is a great pleasure to welcome RFA to Portugal. The signature of this investment contract is an important step to put Portugal at the forefront of innovation in such a pioneering sector as the “rocket” industry, proving talent is the key success factor. In fact, this partnership with CEiiA proves once again the enormous capability of our engineering talent. A decade ago, Portugal was doing its first steps in the aeronautical sector. Now we are entering a new era, planting the seeds of the Space Industry in our country!”, said Luís Castro Henriques, Chairman & CEO of AICEP.

“Opening our facilities in Matosinhos and signing the agreement with AICEP Portugal covers two big milestones for the development of Europe’s most competitive launch service”, says Jörn Spurmann, Chief Commercial Officer at RFA. “Portugal is home to some fine engineering and the composite structures produced there will be very difficult to compete with”, adds Stefan Brieschenk, Chief Operating Officer at RFA.

“The establishment of this partnership with RFA is a good example of CEiiA’s unique role in attracting complete development programs in high-tech sectors, from concept to industrialization of advanced products, that allow not only to generate value, but also to fix it in our country, while competitively positioning Portugal on the space industry map”, said Tiago Rebelo, technical director at CEiiA.

Portuguese Trade & Investment Agency is a government entity focused on attracting productive investment, increasing exports, and internationalizing Portuguese businesses to boost the country’s economy. AICEP is a “one-stop shop” agency and the ideal business partner for those looking to invest in Portugal or to purchase Portuguese products and services. With offices in Portugal and abroad, AICEP supports international companies investing in Portugal through project analysis and by helping select installation sites and human resources. Its current president is Luís Castro Henriques. For further information, please visit: www.portugalglobal.pt

Rocket Factory Augsburg was founded in 2018 with the mission to significantly reduce launch costs in the space industry. The company’s goal is to develop a launch vehicle prototype by the end of 2022 which can launch satellites into low Earth orbits on a weekly basis at unmatched prices. The RFA ONE launch service combines three key competitive advantages: a highly cost-efficient architecture using industrial automation and lowest-possible development costs, precise in-orbit delivery and superior propulsion systems using staged-combustion.

CEiiA is a Centre of Engineering and Product Development focused on fostering sustainability and quality of life, while addressing complex challenges across the board and working in high-tech sectors such as, automotive and mobility, aeronautics, ocean and space. CEiiA’s vision is to establish Portugal as a reference within these high-tech industries, contributing to a more sustainable society, and developing technologies, products and systems conceived, industrialized and operated from Portugal. CEiiA operates in the global market, having a subsidiary in Brazil and engineering teams deployed in the United Kingdom, Switzerland, France and Italy. Currently, CEiiA has a team of +300 Researchers and Engineers presently involved in Development & Engineering activities with integrated product and process development methodologies, based upon full capabilities for product development including concept, design, research, engineering, prototyping and testing of materials and full-scale structures. www.ceiia.com