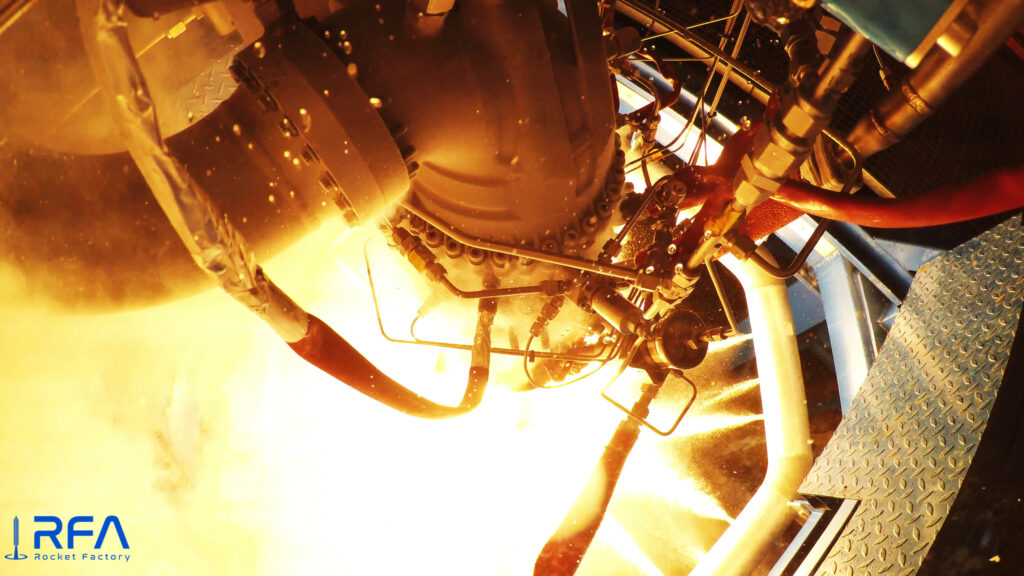 Augsburg, Germany, 21.06.2021 Launch service provider Rocket Factory Augsburg has demonstrated its technological leadership with its successful firing tests of its full-scale staged combustion engine. During the 2-second test, which was carried out in Kiruna (Sweden), RFA successfully commissioned the first staged combustion engine in Western Europe. Staged combustion technology is characterized by higher efficiencies and performances compared to traditional rocket engine designs. The partially unburnt exhaust gases from the turbopump are fed back to the main combustion chamber, thereby avoiding the release of unburned fuel. The recycling of the exhaust gases significantly increases the overall efficiency of the launch vehicle while reducing launch costs and also minimizing CO2-footprints of the launch activity. This ground-breaking achievement allows RFA to offer unmatched prices, putting them ahead in the global race for low-cost space launch.

Two planned milestones were already reached at the beginning of May of this year. In the so-called “power-pack test”, the turbopump and pre-burner were started and operated in a stable, steady-state thermo-mechanical condition for a total burn-time of 8 seconds. In the next development step, the first ignitions of the main combustion chamber were conducted, after which the test team connected the “power pack” to all systems of the full-scale engine and performed the complete system-level test.

Rocket Factory Augsburg was founded in 2018 with the mission to significantly reduce launch costs in the space industry. The company’s goal is to develop a launch vehicle prototype by the end of 2022 which can launch satellites into low Earth orbits on a weekly basis at unmatched prices. The RFA ONE launch vehicle combines three key competitive advantages: a highly cost-efficient architecture using industrial automation, lowest-possible development costs, precise in-orbit delivery and superior propulsion systems using staged combustion.