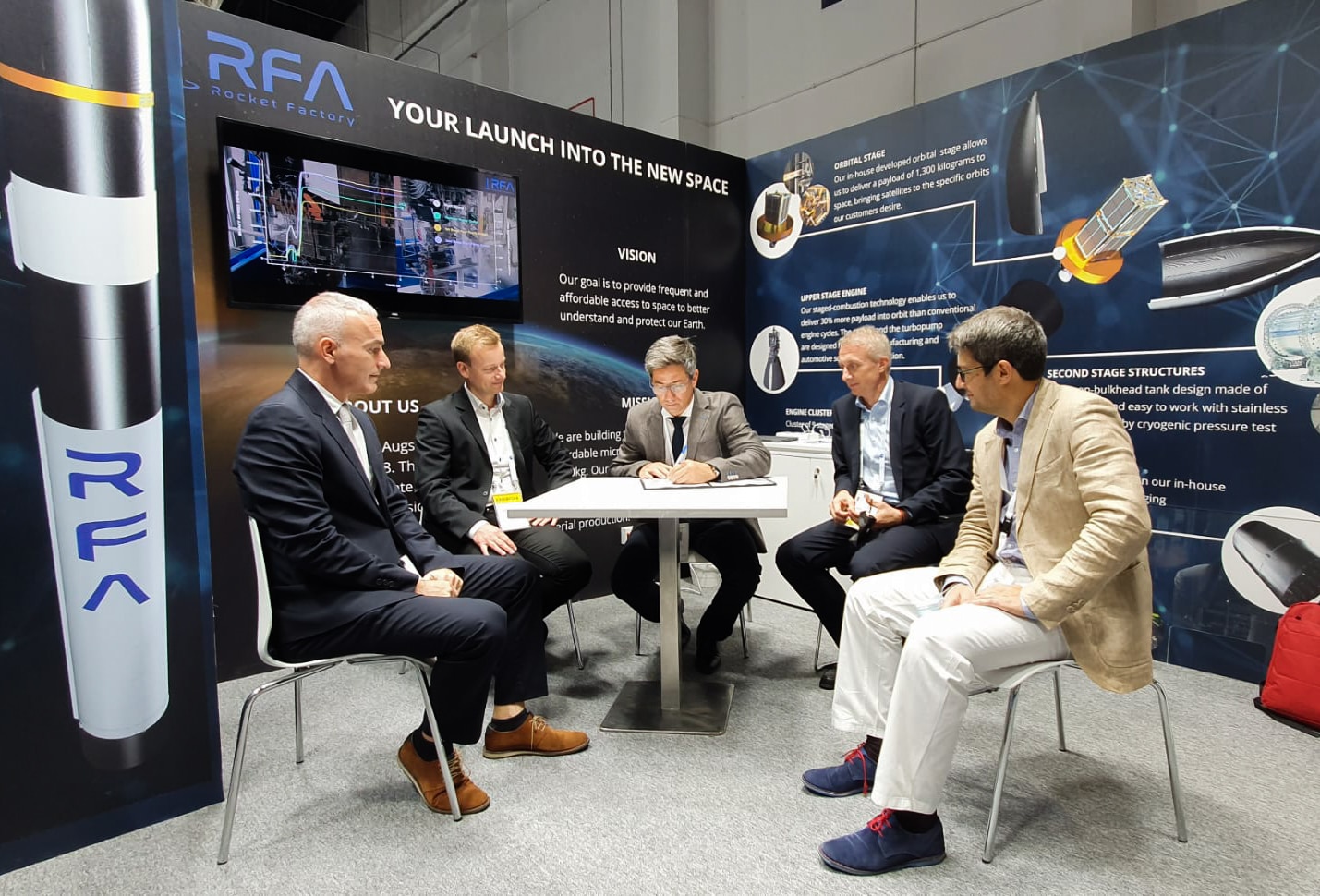 SENER Aeroespacial will launch its small satellite, called E.T.PACK, into near-Earth orbit at mid-inclination. E.T.PACK is a deorbit device that will demonstrate a novel electrodynamic tether technology for deorbiting satellites and launcher upper stages without chemical or electrical propulsion. The flight is of high interest for RFA since the potential adoption of SENER Aeroespacial technology in the future can be an asset for the RFA ONE launch system.

The signing of the agreement took place on October 26 during the IAC 2021 exhibition in Dubai, between the Chief Commercial Officer of RFA, Jörn Spurmann, and the Director of Institutional Space Department of SENER Aeroespacial, Augusto Caramagno.

“We are very pleased to have won SENER Aeroespacial as a customer. After very trusting discussions, we were able to offer a customized launch service tailored precisely to their requirements. We benefited from the fact that we were able to convince SENER Aeroespacial not only with our price, but above all with our service. This speaks for the competitiveness of RFA ONE,” says Jörn Spurmann, Chief Commercial Officer of RFA.

“The launch of E.T.PACK with RFA is a wonderful opportunity not only of receiving a high quality service, but also to forge a very profitable cooperation between the two companies. RFA is a perfect partner for our E.T.PACK technology demonstration since the deorbiting of launcher upper stages is a key application for our system” says Augusto Caramagno, Director of Institutional Space Department of SENER Aeroespacial.

E.T.PACK is a FET-OPEN project funded with €3million by the European Commission, developed by SENER Aeroespacial and UC3M together with other partners of the E.T.PACK’s consortium. This deorbit device is a small “kit” that will be mounted on launcher upper stages and satellites in the future and will allow those spacecrafts to be eliminated at the end-of-life, instead of the actual trend of leaving them in orbit. The drag force on the electrodynamic tether causes the re-entry of the satellite and its elimination at the upper layers of the atmosphere. Unlike conventional technologies, it does not need a propellant and works passively.

E.T.PACK aims to provide a light, low-cost and highly effective system that will be able to communicate with the ground, stabilize a satellite of mass up to 1,000 kg and control the deorbiting maneuver to prevent collisions with other objects.

Therefore, the launch of SENER Aerospacial’s satellite with the E.T.PACK technology demonstrator will be a decisive step in validating this innovative technology.

Rocket Factory Augsburg was founded in 2018 with the mission to significantly reduce launch costs in the space industry. The company’s goal is to develop a launch vehicle prototype by the end of 2022 which can launch satellites into low Earth orbits on a weekly basis at unmatched prices. The RFA ONE launch vehicle combines three key competitive advantages: a highly cost-efficient architecture using industrial automation and lowest-possible development costs, precise in-orbit delivery by its orbital stage, and superior propulsion systems using staged-combustion.

SENER Aeroespacial has been a leading supplier of high performance aerospace systems for Space, Defense and Science for more than 50 years, with high added value technological developments. In Space, it supplies electromechanical components and systems, navigation systems (GNC/AOCS), communications, astronomy and optics systems to satellites and space vehicles for NASA, ESA, JAXA and Roscosmos. Institutes and companies such as CNES, Airbus Space & Defense, Thales Space, OHB, RUAG, SELEX and CSIC also number among its clients. SENER Aeroespacial is part of the SENER engineering and technology group, founded in 1956. The SENER Group has 2,350 professionals in offices in five continents.